A mysterious beginning with an invalid, threatened by a stranger. Just who is this woman and what is her connection to Esme Quentin? Blood–Tied by Wendy Percival is the first of the Esme Quentin series of genealogical mysteries. 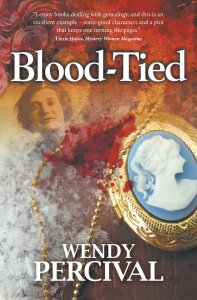 Esme’s older sister Elizabeth is attacked and in hospital in a coma. Why was she in a town forty miles from home? Did she fall, or was she pushed? And who are the two people in photographs hidden in Elizabeth’s treasured locket? At the start of this story, Esme knows who her family is but once she starts to dig into Elizabeth’s odd accident/attack she uncovers a complicated family history that had me confused at times. This genealogical mystery involves a long-ago family argument, a derelict canal and a feisty elderly lady in a residential home. Esme is a bit like a dog with a bone, she won’t give up despite getting the jitters in the dark of the night.

Two things would have made my reading experience easier. Esme’s history – scar, widow, background as investigative journalist – was thinly drawn so it felt as if I was reading part two of a two-book series. The family twists and turns were such that I was often lost, perhaps because so much was told as Esme discovered paperwork, rather than seeing the action on the page by the characters concerned. That said, the menace builds nicely though I read to the end to find out what happened to Polly, the feisty lady.
BUY