Blue-Eyed Son by journalist and broadcaster Nicky Campbell is a personal story but everyone will be able to identify with his themes of family love, the need for belonging and a clear sense of identity.  Campbell knows how to tell a story well. He charts the ups and downs of his search for his birth mother and father, the agonies of deciding to search, the worries about whether he was betraying his adoptive family. 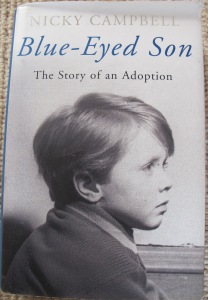 He shares the pain, the anticipation of making that first contact: “She [his wife Linda] stood in the hall and dialled the number. I was sitting on the stairs, rigid with fear, my head buried in my hands, my body folding into a foetal position. I really didn’t think I could go through with it. I was petrified and exhausted. What the hell would I say? What the hell do you say? This woman gave birth to me. I needed an epidural.

“I had held this fantasy in my head for years. I had a mental picture of a beautiful but driven career woman – a free spirit who found herself in this impossible situation and made an extraordinary sacrifice. She gave her baby away. Her baby was about to catch up with her. we were about to speak to her. I was about to clothe this idealised wraith in humanity. At 29 I was about to make the first connection with my own flesh and blood, someone to whom I was genetically connected. That word – genetic – it had an almost sacred meaning for me. [It still does.] A genetic link; a magical bond. An inexpressible essence of belonging and being.

“From my seat on the stairs I could hear the ring at the other end. It stopped. A woman’s voice. Soft, Irish, hesitant and wary. ‘Hello.’

Campbell finds so much more than his birth mother and father, he finds his family. It doesn’t matter that he is a face familiar on the television, his story will affect everyone.
BUY

If you like this, try:-
‘Relative Strangers’ by Hunter Davies
‘The Blood Detective’ by Dan Waddell
‘Pale as the Dead’ by Fiona Mountain