A Good Likeness is a well-written account of an adoptee’s journey, not in the least bit self-obsessed or mawkish. Paul Arnott knows he was adopted but doesn’t stop to think about what it means until in his thirties with his own children. He writes to his adoption society and gets a letter back with information about his birth parents. “The section of my mind concerned with the concept of identity, which had been lying under a sheet in the garage since I was born, suddenly roared into life.” 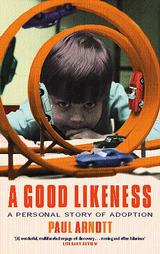 He shares the emotional ups and downs of his search, which finally takes him to a second family in Ireland.

He was Rory, not Paul. “It must be inconceivable to those raised by their blood parents, surrounded by grandparents, sisters and brothers, that a man in his thirties had never given any serious credit to the potency of family resemblance.”
BUY THE BOOK