Anna Ames is a trainee probate genealogist working for Triple H, Harts Heir Hunters, and File under Family is the first in a series of genealogy mysteries about Anna by Geraldine Wall. When Margaret Clark dies Anna is charged with finding her missing heir, daughter Briony. The trail leads abroad and unleashes an international social media campaign, reveals sexual abuse in prison and considers how enthusiasm can conflict with client confidentiality. 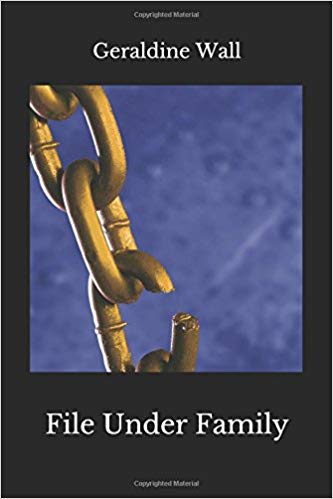 Wall introduces the character of Anna and her family life which I am sure will continue to feature throughout the series. While she faces problems balancing work with studying for her Diploma in Genealogy qualification, these are nothing when compared to Anna’s stress at home. Her husband Harry has early-onset dementia so Anna’s father George has moved in to help with caring for Harry and their two teenagers, Ellis and Faye. Faye has a new Russian boyfriend who wants to take her to Russia with him. Ellis is auditioning for a role in the school panto while George is investigating his spiritual side and writing poetry. Worst of all, as Harry’s condition gradually deteriorates he becomes increasing aggressive towards Anna. Into this walks an unattractive stranger.

I found the first couple of chapters disorientating as the story pitches straight into Anna’s day with minimal explanation of her job. But the story settles down and the mystery of Briony’s whereabouts kept me reading. I particularly liked the characters of Margaret’s friends, Joan and Diane, and the importance of Bob the dog in the family dynamics. Anna’s home life is at times a little over-complicated as each family member has their own drama. Anna is a positive character, strongly defending her own family and trying to do her best for her client, albeit crossing the line at times and getting into trouble. This only serves to endear her as a convincing character. However the last quarter of the novel, after Briony’s case is solved, seemed to meander almost as if it was merging straight into book two in the series.

Not so much a genealogical mystery, more a family drama enriched by Anna’s job as a probate genealogist. It made me curious enough to read the next in the series, File under Fear.
BUY THE BOOK

If you like this genealogy mystery, try:-
‘The Ghost of Lily Painter’ by Caitlin Davies
‘The Indelible Stain’ by Wendy Percival
‘The Marriage Certificate’ by Stephen Molyneux