Dave Lowe, 57, had been given up for adoption when he was just a few months old and his mother was unable to cope. He searched for years for his birth family. Two television programmes – The Jeremy Kyle Show, and Long Lost Family – were unable to help. So his daughter Louise took up the search. Via Genes Reunited and Facebook, she made contact with a woman called Zoe Anderson. Zoe was Dave’s birth sister. 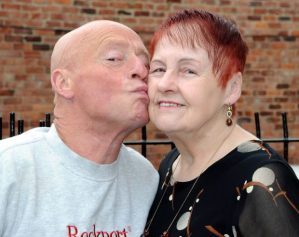 His birth mother Maureen sent him a text message, “At last my dearest wish has come true – to find you before I die.” Dave was reunited with Maureen, two brothers and a sister. He said, “This has made my life complete.”

The trail was broken when the family had moved to Bradford, West Yorkshire, from the Newcastle in the North East. Dave said, “I would never blame my mum for what happened all those years ago. She was so young, only a teenager, and by giving me away showed responsibility far beyond her years. She knew that I would be well looked after.” Maureen remembers, “I was heartbroken when I had to give him away, his father was absent and I was so young and would have really struggled. My last memory was of him as a tiny baby in my arms and now he is towering over me. I couldn’t be more proud.” 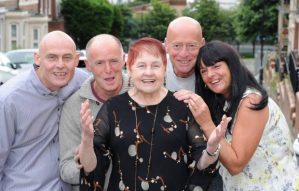 Dave had despaired of ever finding his mother again. “I tried to go through agencies but all they wanted was money and the costs were extortionate. I never knew that Louise had been doing some digging of her own to surprise me.” He later found out that his birth family had been searching for him for 25 years.

If you like this true story, read:-
Philip Sais
George Orwell
George Dennehy