During the UK’s Industrial Revolution, raw materials and finished goods were transported around the country by canal. By the mid-19thcentury though, the new railways were taking away the business of the barges. Working on a canal boat was a tough life. Slow boats could take up to seven days to go from Birmingham to London and boatmen were expected to work up to 20 hours a day. Records reach to the end of the 20th century so may contain birth fathers and paternal family lines. 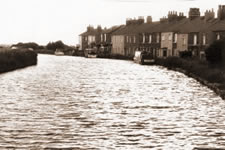 Under threat from the railways, ‘family’ boats became numerous with a wife and children travelling with her husband. Boating became a closed occupation and outsiders, gongoozlers, discouraged. Boat people developed their own dress, language and took great pride in the decoration of their boats. Acts of Parliament were passed in 1877 and 1884 making canal boats subject to inspection to check living conditions, and some of these inspection reports survive in local archives.

Considering the itinerant nature of the boatman, there are a number of excellent resources for family history researchers:-

The Boat Families website is a resource kept by local enthusiasts, cataloguing life on the Leeds-Liverpool Canal & associated waterways, especially in South-West Lancashire. Names are listed by canal family, with more than 32,000 individuals named.

A search for ‘boatmen’ at the British Newspaper Archive yielded articles dating from 1700 to the present day, from around the UK. Examples include an 1886 Seamen’s and Boatman’s Mission Conference in Bristol, and in 1904 a canal boatman’s strike in Kirkintilloch.

The Coventry Family History Society runs the Coventry Canal Boat Register covers the years from 1879 to 1936 and is searchable by the surname or the boats’ owners and masters.

The Canal Boat Register Index 1795-1797 can be found at Staffordshire Name Indexes, it includes the names and place of abode of the vessels’ owners and masters, the number and capacity of the men employed onboard, information about the vessel such as it’ burthen (load), number and usual navigation route.

Many records will be found in local authority archives, such as company minutes and correspondence, wage sheets and workmen’s timetables, even wartime records. Finding a possible location for your boatman ancestor will help you to find a local archive to explore. Also try The National Archives Discovery Catalogue, where a search for ‘boatmen’ yields 471 records including boatmen’s licences, payments, wages and accidents up to the 1990s.

This post is inspired by an article by Linda Barley of the Canal & River Trust in the May 2017 issue of ‘Who Do You Think You Are?’ magazine.

For more articles about researching family records, try:-
Was your relative an apothecary
Where to start your #familyhistory search
How to use British trade directories