Three girls grow up living near each other in Wells, Connecticut. Dana. Jackie. Lupita. Each in a different social class. With or without wealth. With or without expectations. Privilege, no privilege. One betrayal touches their lives and has ramifications for the next generation. The End of the Day by Bill Clegg is about the fragility of loyalty when teenage bonds are tested by love, jealousy, indiscretions, secrets and lies. ‘To end a friendship, it just takes someone willing to throw it away.’ Because when a decision is taken, more than one life is affected. 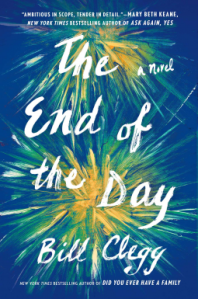 Clegg has written a genealogical story wrapped up in two timelines, the years not defined but basically the Sixties and the Noughties. An elderly woman, frail and confused, sets out from New York on an excursion. Another old woman wakes in her family home to a beautiful passage of memories. A taxi driver in Hawaii ignores the repeated messages left on her mobile phone. These three are connected by a youthful flirtation, a pregnancy, arrangements made and lies told, assumptions made. A fascinating story, characters so believable, but the details lacking in clarity – perhaps because so many lies have been told. In the Noughties are mother and son Alice and Hap. Hap’s life takes two momentous turns when his father is seriously ill in hospital, the same hospital where his wife has just given birth to their baby daughter. A little girl still, significantly, without a name.

The first half is a slow read with beautiful writing that at times edged towards the self-indulgent. The book, though not long, felt long. I wanted occasional clarity of story and shorter paragraphs. I was unclear about the different houses featured – the childhood homes of Jackie and Dana and the area in which they lived. Perhaps the author knows it so well he forgot to be clear for the reader. The story moves location and year without specification which can be disorientating.

In re-reading the notes I wrote after finishing the book, I found I had twice written ‘lacking clarity’. The story is a sad one, of connections made, lost, and unknown, but for me it could be more touching with a clearer narrative spine. That said, the story stayed with me days after I finished it – always a good sign. The parallels between the generations, the vulnerability of a baby dependent on adults for the truth of its origins, the duty to protect and the urge to run from an old life. An okay story wrapped up in exquisite writing.
BUY THE BOOK

If you like this, try:-
‘Beside Myself’ by Ann Morgan
‘The Orphan’s Gift’ by Renita d’Silva
‘Tainted Tree’ by Jacquelynn Luben