Women’s ambition, women’s capability to lie and manipulate, and women’s ability to love, cherish and recover. Beneath an Indian Sky by Renita D’Silva is the cautionary tale of Sita and Mary and how their lives, from childhood to old age, are entwined in India. It is a symmetrical story, but the permutations of its angles and consequences are not clear until the end. Be patient, relax into the story, because the ending is worth it. 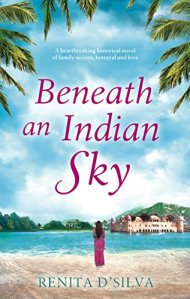 1925, India. Sita’s parents despair of her acting like a girl so, to encourage more restrained behavior, they arrange for her to become friends with Mary. Mary’s parents encourage individuality, freedom and learning, but Mary secretly envies the rules and ordered life of Sita’s home. And so the two girls become friends. Until in 1926 something happens which splits them apart.

This is a tale of opposites; two little girls who, despite being different, become friends. What happens when they grow up turns into a darker more difficult story about friendship, honesty, betrayal, loss, anguish and regret. Renita D’Silva takes you to another world, India pre- and post-partition, with all its scents, colours, flavours, wealth and poverty. She is a magical writer of the setting into which she lays an emotional story of the twists and turns of women’s treachery and ability to heal.

The girls are born into an India where women must defer to their husbands and sons, where endless wealth and dirt-grovelling poverty exist side-by-side; where women do not always support each other and mistakes are not forgotten. Behind the story is a ‘be careful what you wish for’ moral that applies to both girls. Intertwined with their story is the modern one of Priya, a documentary film-maker, who lives in London and is unable to have a child.

I really enjoyed this book, read quickly over a weekend. Be warned, secrets have a way of being found out.
BUY THE BOOK

Try these other books by Renita d’Silva:-
A Mother’s Secret
The Orphan’s Gift

If you like this, try:-
‘The Lost Ancestor’ by Nathan Dylan Goodwin
‘The Carer’ by Deborah Moggach
‘Ignoring Gravity’ by Sandra Danby