If you are a PD James fan, I should say up front that Innocent Blood is very different from the Adam Dalgliesh detective series. It is a psychological thriller, a slow-building mystery which starts with little steps then, as the odd details start to make sense, the tension builds. It is the story of a young woman who knows she is adopted, who exercises her right to know the names of her birth parents, and finds something she never in a million years expected.

Philippa Palfrey is 18, about to go up to Cambridge, until she decides to find out the truth of her adoption. Her birth father is dead, her mother though is still alive. Philippa’s adoptive father warns caution, tells her to do her research and think carefully before contacting her mother but Philippa, driven by the need to know who she is and where she came from, goes ahead anyway. With the arrogance and naivety of youth, she embarks on a complicated path full of moral dilemma, tragedy and loss.

It is a novel of family blood and relationships, violence, redemption, revenge and acceptance. Is there a threat, real or imagined, and where/who does that threat come from? As the story progresses, that threat advances and retreats, reforming in another shape. Is Philippa right, or should she have listened to Maurice’s warnings?
BUY THE BOOK

If you like this genealogy mystery, try:-
‘Deadly Descent’ by Charlotte Hinger
‘The Ghost of Lily Painter’ by Caitlin Davies
‘File Under Fear’ by Geraldine Wall

Star d’Aplièse, the third of the six adopted sisters in Lucinda Riley’s dual-timeline adoption mystery series is the subject of The Shadow Sister. Riley excels at combining a contemporary mystery with a related historical story and so far in the series Star has been something of an enigma. Almost twinned to CeCe, her nearest sister in age, she is the quiet unassuming one in this flamboyant family. In The Shadow Sister,she steps out of the shadows and discovers a past involving Beatrix Potter, Mrs Keppel and the King of England. 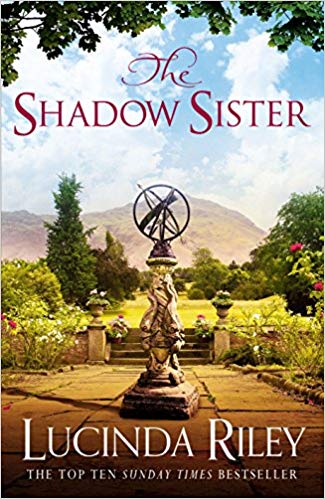 When their adopted father Pa Salt dies, he leaves each girl a letter and clue about their birth. Star’s journey takes her first to Kensington, London, to an eccentric rare bookseller where Star, grieving and feeling adrift in life, takes a job as bookshop assistant. She soon proves herself irreplaceable to shop owner Orlando who invites her to his family home in Kent. There she meets his surly brother Mouse – who Star thinks of as ‘The Sewer Rat’ – and delightful nephew Rory. As Star becomes caught up in the turmoil of the Vaughan family, distance grows between herself and CeCe. Slowly Star recognises that in order to work out who she is, she must be separate from her sister.

This novel is not just the contemporary story of Star ‘finding herself’ it is also the story of her ancestry. The historical strand takes us back to 1909 to Flora MaNichol who lives at Esthwaite Hall in the Lake District, and is a neighbour to Beatrix Potter. Flora’s family life is enigmatic, although she is the older sister it is the younger Aurelia who is given a London season and engagement to Archie, destined to be Lord Vaughan, encouraged. Flora would rather run wild on the fells, drawing animals and plants, avoiding her censorious father. Her life takes a turn when she too must live in London, at the house of Mrs Keppel, notorious mistress to the King. Star’s clue hints at a wealthy inheritance, a small onyx animal figurine named ‘Panther’. How can this be connected to Flora; why is she feted as a guest by Mrs Keppel, and what are the connections to Star a century later?

One issue I have with the series is that rather than actually being about the sisters’ mysterious parentage and how Pa Salt came to adopt them, they tell a historical story set two or three generations earlier. So far I have enjoyed all three of the historical stories; I am reading the series in order. The historical strands are linked to each relevant sister, but I am left feeling slightly short-changed about the truth of their birth. I want to know more about the birth parents and how Pa Salt came to adopt them. However in this book, more than the first two, his shadow is more evident so perhaps his story will be unveiled in the seventh book of the series.
BUY

Next in the series is The Pearl Sister, the story of CeCe.
Read my reviews of the first two novels in the series:-
The Seven Sisters
The Storm Sister

If you like this genealogy mystery, try:-
‘Pale as the Dead’ by Fiona Mountain
‘Blood-Tied’ by Wendy Percival
‘The Blood Detective’ by Dan Waddell