If you know your ancestor’s trade, there is a good chance he or she may have trained through an apprenticeship scheme. In 1563, the Statute of Artificers and Apprentices forbade anyone from practising a craft without first serving as an apprentice. And from 1710, a duty was levied. These records form a central register of apprentices by the Inland Revenue and held at The National Archives. 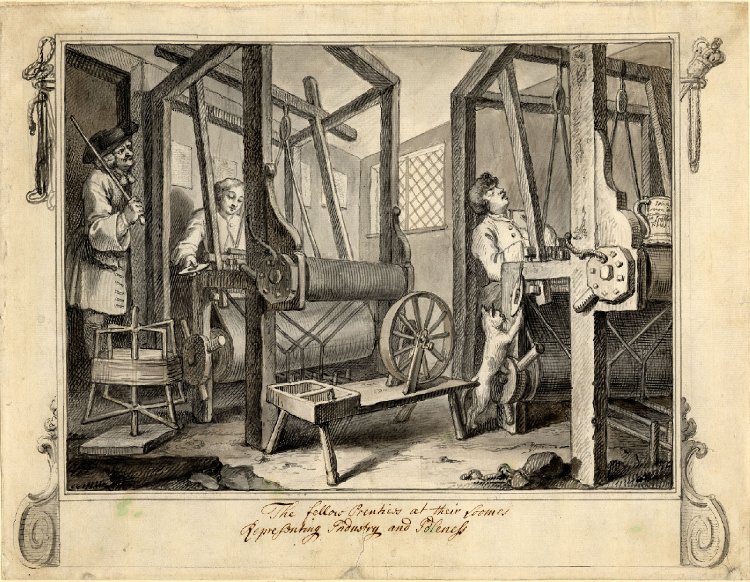 ‘The fellow ‘prentices at their looms’ by William Hogarth, 1747

As well as trade apprenticeships, there were also apprenticeships which were arranged specifically by parish overseers of the poor and were intended to prevent the child being a burden on the parish. As pauper apprenticeships were liable for duty the records are kept separately, often found in local record offices and parish chests.

If your research is based on London, start with London Lives where pauper apprenticeship records range from 1690-1800. It has a useful guide ‘Researching Apprenticeships’.

Some of the apprentice records held at The National Archives have been digitised and are now available at Find My Past, including the London Apprenticeship Abstracts [1440-1850] which list all those apprenticed to livery companies in London. It also includes regional records from Manchester and Lincolnshire.

The Board of Stamps apprenticeship books record payments on the duty of indentures, as mentioned above. These records are available at The National Archives. If searching by name, remember that often that until 1752 the child’s parents’ names may also be given.

A useful description of the different types of apprenticeships and the associated records, can be found at GenGuide. There is also a summary of the major places where apprenticeship records are held with user-friendly links.

‘Child dragging coal in a Halifax mine’ by Peter Higginbotham, 1842 [photo: workhouses.org.uk]

For an overview of the pauper apprenticeship scheme, read this article at the Workhouses website. Boys originally started an apprenticeship at the age of 10, until the age was dropped to seven in 1698. This website is a good source of information if one of your relatives spent time in a workhouse.

Always check with your local archive and try Google, there are many smaller websites specialising in particular occupations.

This post is inspired by an article by Jonathan Scott in the April 2017 issue of ‘Who Do You Think You Are?’ magazine.

For more articles about researching family records, try:-
Check your local records
Films bring history to life
Did your relative belong to a #tradeunion

Rose Haldane, in Ignoring Gravity, is a journalist. To find out about journalism training schemes, check out the National Council for Training of Journalists.

5* A reader at Amazon said, “‘Ignoring Gravity’ is a very enjoyable read from beginning to end. The warm story will tear at your heart strings one moment, and make you smile the next”

Start reading the ‘Identity Detective’ series with Ignoring Gravity… Two pairs of sisters, separated by a generation of secrets: Rose is confident about her identity. She knows her DNA is the same as her grandmother’s. Except it isn’t because Rose is adopted & doesn’t know it. BUY