A fascinating mixture of modern crime novel and family history research, Blood Atonement takes Nigel Barnes from London to the USA as he races against time to find answers for Detective Chief Inspector Grant Foster. 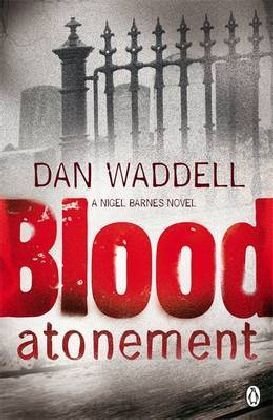 Foster’s first case after returning to work following injuries sustained in The Blood Detective [first in this genealogical crime series] is a dead actress and her missing daughter. Links to the actress’s past, mystery about her family and unanswered questions, lead Foster to call in the help of genealogist Nigel Barnes. Both men are strong characters who walk off the page, both loners of a kind, both lonely in love.

This is a fast-moving mystery revolving around what happened to Horton and Sarah Rowley, who we know from flashbacks were teenage sweethearts planning to run away, but who only appear in records in the UK from 1891. Before that, they cease to exist. Where did they come from, and why were they running? Simply because their parents disapproved of the marriage, or something more sinister? And what has this to do with the dead actress found lying face down on her lawn in London? As he searches for the missing 14-year old, Foster finds chilling parallels with Leonie, another 14-year old who disappeared three years earlier and has never been found. As links to a cult are uncovered, attention focuses back on Sarah and Horton.

A satisfying well-written plot which manages to slip in a little history too.
BUY THE BOOK
Read my review of the first in the series, The Blood Detective.

If you like this genealogy mystery, try:-
‘Deadly Descent’ by Charlotte Hinger
‘The Shadow Sister’ by Lucinda Riley
‘The Indelible Stain’ by Wendy Percival

When the key character of a novel goes on holiday or visits a picturesque place, you know something is going to happen. Genealogist Esme Quentin in The Indelible Stain by Wendy Percival goes to Devon to help a friend archive the records of a local charity for underprivileged children. Second in the Esme Quentin genealogical mysteries, this is an enjoyable story of convict history set in a beautiful Devon location. But beneath that beauty lurk fraud, lies and revenge. Hatred and bitterness reach from the past to the current day.

Up early on her first morning, Esme takes a walk on the wild beach and finds a body. The woman, just alive, seems to have fallen from the cliffs. Her last words, spoken to Esme, are key to the mystery which follows. “I lied,” she says. Beside her body is an old sepia photograph. The police don’t take seriously Esme’s concerns that the woman’s last words combined with the mystery photograph indicate foul play, so Esme decides to identify the family in the photograph.

Meanwhile, Neave Shaw is worrying about her mother who has disappeared after sending a confused, possibly drunken, email. Worried and not understanding her grandmother’s dismissive attitude to Bella’s disappearance, Neave presses for answers but is interrupted by a knock on the door. It is the police. Neave arrives in Warren Quay and asks Esme for help in understanding why her mother died. Esme quickly puts a name to one of the people in the sepia photograph: Sarah Baker, a thief who was transported as a convict in 1837. Sarah’s story adds a fascinating layer of history to this whodunnit and whydunnit mystery. But what is Sarah’s link to Neave’s dead mother? And did Bella fall or was she pushed? Esme’s research into Sarah’s convict history is helped by the presence of the Mary Ann, a restored nineteenth-century sailing ship with an on-board museum about the history of convict transportation.

The last few pages move at top speed as Esme discovers hidden identities and double-crossings and races to find Neave to warn her of danger. She knows that whoever killed Bella to protect the secret will not hesitate to kill again. I would have liked to read more about Sarah Baker’s journey on a convict ship to Australia and her life there, showing some of the facts rather than having Esme discover them in a dry record search. So much tantalising history lies beneath the surface of this story. I found some elements confusing at times as the story moves so fast and also because of the number of aliases and marriages; this might have been eased by merging or dropping some minor characters, for example Ruth/Maddy, Dan/Felix. But Percival’s characterisation of some minor characters was spot on; I particularly liked retired schoolteacher Miss Hodge and Neave’s irascible grandmother Gwen.

This is a well-paced genealogical thriller enriched by its Australian and Irish links and demonstrating how the resentment of wrongdoing can persevere across the generations.
BUY
Read my review of Blood-Tied, the first Esme Quentin book.

If you like this genealogy mystery, try:-
‘The Ghost of Lily Painter’ by Caitlin Davies
‘The Blood Detective’ by Dan Waddell
‘Pale as the Dead’ by Fiona Mountain

This is an unusual mix of genealogy mystery and history, centred on the glamorous Pre-Raphaelite artists and Lizzie Siddal, the girl in the famous ‘Ophelia’ painting. Ancestry detective Natasha Blake meets a mysterious, beautiful young woman, Bethany, who is re-enacting the Lizzie Siddal scene for a photographer. Bethany confides in Natasha her fear that her family is cursed following the deaths of her sister and mother. After asking Natasha to research her family tree, Bethany goes missing. Has she run from a failing love affair, committed suicide, or has she been murdered?

The trail is cold. Natasha must turn detective in two senses: she searches the birth, marriage and death records, census returns and wills, to find Natasha’s ancestors; at the same time, she is being followed by someone driving a red Celica. Adam, the photographer, is also Bethany’s boyfriend but Natasha feels there is more to his story than he is telling.

The narrative wandered rather from the central story, complicated unnecessarily by Natasha’s own history and love life which added little. Perhaps this could have been avoided by telling part of the story from Lizzie Siddal’s point of view. There were so many peripheral characters, both in the present time and the historical story, that at times I lost my way. I was also unconvinced by the threat to Natasha – the red car, the break-in. These jarred, almost as if added as an afterthought to appeal to lovers of crime fiction which I think was unnecessary. The kernel of the story about Bethany and Lizzie is fascinating in its own right.

Pale as the Dead is the first of two Natasha Blake novels.
BUY

If you like this genealogy mystery, try:-
‘Blood-Tied’ by Wendy Percival
‘The Seven Sisters’ by Lucinda Riley
‘The Blood Detective’ by Dan Waddell

A mysterious beginning with an invalid, threatened by a stranger. Just who is this woman and what is her connection to Esme Quentin? Blood–Tied by Wendy Percival is the first of the Esme Quentin series of genealogical mysteries.

Esme’s older sister Elizabeth is attacked and in hospital in a coma. Why was she in a town forty miles from home? Did she fall, or was she pushed? And who are the two people in photographs hidden in Elizabeth’s treasured locket? At the start of this story, Esme knows who her family is but once she starts to dig into Elizabeth’s odd accident/attack she uncovers a complicated family history that had me confused at times. This genealogical mystery involves a long-ago family argument, a derelict canal and a feisty elderly lady in a residential home. Esme is a bit like a dog with a bone, she won’t give up despite getting the jitters in the dark of the night.

Two things would have made my reading experience easier. Esme’s history – scar, widow, background as investigative journalist – was thinly drawn so it felt as if I was reading part two of a two-book series. The family twists and turns were such that I was often lost, perhaps because so much was told as Esme discovered paperwork, rather than seeing the action on the page by the characters concerned. That said, the menace builds nicely though I read to the end to find out what happened to Polly, the feisty lady.
BUY

I raced through The Blood Detective by Dan Waddell, a hybrid mixture of crime and genealogy mystery. Waddell is also a journalist and genealogist, having written Who Do You Think You Are?: The Genealogy Handbook accompanying the Who Do You Think You Are? television series. So, he knows his stuff and it shows. Usually a crime novel features a lead detective and team, here we have two lead characters: Detective Chief Inspector Grant Foster, and genealogist Nigel Barnes.

Waddell’s plotting is ingenious. The past really does come back to haunt the present. There is a serial killer in West London who leaves a clue carved into the skin of his victims. This clue prompts DCI Foster to call on the specialist help of researcher Barnes. The murder hunt takes parallel paths: Foster chases living suspects, Barnes searches the archives for the true 1879 story of a serial killer, his victims and their descendants. What is the link? The final chapters are a thrilling race against time.

I really enjoyed this. The linking of historical and present-day crime was clever, and the characterization was convincing and not of the stereotypical detective form. An enjoyable mixture of fast-moving crime novel with genealogical research and historical gems about this particular part of London, its transformation from Victorian times to the 21stcentury, and its dark history of crime. There is a second novel featuring the same characters, Blood Atonement.
BUY

If you like this genealogy mystery, try:-
‘Blood-Tied’ by Wendy Percival
‘The Seven Sisters’ by Lucinda Riley
‘Pale as the Dead’ by Fiona Mountain