A group of Great War soldiers is waiting for orders. During the last skirmishes of the war, men are still dying. Will the men receive orders to retreat or advance? Who will live or who will die? There are two strands to The Inheritance of Solomon Farthing by Mary Paulson-Ellis and the title refers to the second. A contemporary man in Edinburgh, an heir hunter, finds a pawn ticket amongst the possessions of Thomas Methven, an old soldier who died alone. 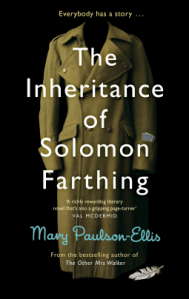 This is a detailed story with many layers and many characters introduced as the two strands are told and hesitantly connected. At times the detail became confusing with so many descriptive repetitions I found myself skipping forwards. Paulson-Ellis writes scenes so well – the soldier’s gambling scene with the chicken is totally believable, and her portrayal of the foundling school in NE England is heart breaking. As Solomon tracks the life story of the deceased soldier, we see flashes of his own story, orphaned at seven and sent to live with his grandfather. Though interesting I found this distracting, it took me away from the story of the soldiers and added even more characters and family trees to remember.

The message is that the debts of the past do not disappear. Captain Godfrey Farthing is waiting, always waiting; to live to die, to advance, to retreat. He is simply trying to keep his men safe to the end of the war, which they suspect may come at any time. But Farthing’s intentions may be wrecked by enemy attack, by orders to attack, or by his own men themselves who are confined and bored. ‘A strange peace was coursing through his veins; that terrible calm that comes when a man knows the end is coming, but not in the way he had imagined when he began.’

Gambling is a continuous theme throughout the WW1 strand, and I lost track of the treasures gambled, won and lost, coveted, stolen and hidden. There are 11 soldiers involved, surely too many. Like The Lord of the Flies, the boredom of the men, their jealousies, petty rivalries and guns come to dominate their world, as if the war is already over. The treasures they gamble can be the smallest thing which to us may seem irrelevant but in war is crucial. Not monetary value as known at home, but representing an emotional or practical value.

Different rules apply during wartime and items that are significant then are cast into the spotlight when they survive across the generations to be found by modern day relatives. I admit to confusion about who was related to who and perhaps the cutting of a few peripheral characters would help. Given my interest in family history and WW1, I expected to love this book but longed for a firmer editing hand.
BUY THE BOOK

If you like this, try:-
‘File Under Family’ by Geraldine Wall
‘Fred’s Funeral’ by Sandy Day
‘Hiding the Past’ by Nathan Dylan Goodwin